I wanted to make something that showed some movement and grace, as I experienced when I watched the Lion King Disney Production on Utube. 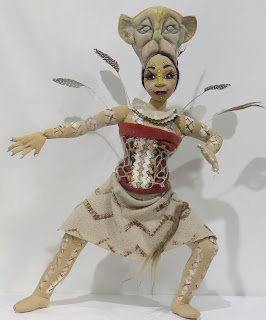 I had done some study on pattern design, and life drawing helped me understand how anatomy and posture works. I like a more realistic figure to hold the body together and I am concious of getting a balance in the figure. 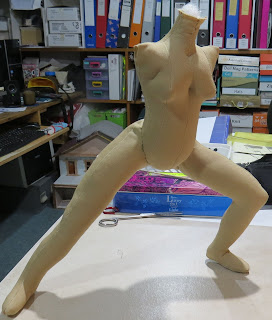 The fabric is velour, and the tiny one way stretch gives it a beautiful soft shape.  The importance of stuffing the body sufficiently and well, using forceps and fingers to massage the stuffing around the body to create the shape is imperative and not to be underestimated. 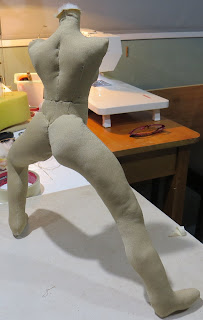 Needlesculpting the body to get the correct pose was the next step, then the armature.  At this stage I had npt learned how to make the soles of the feet flat, so this figure ended up with something under the foot to make it stand alone - I ws not satisfied with it, but let it be, because this was figure one! I also had to shape the lower body sufficiently to insert the armature, and then mold the hip around the body to create buttocks.  I love the way the light falls an this figure. 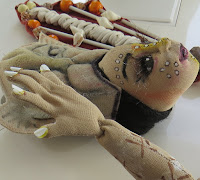 I wanted the hands to be posed and graceful, so made them separately on this one.  One arm is straight, but the other arm is in two pieces to facilitate a more natural bend at the elbow. 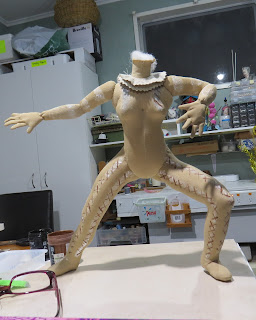 Time to begin painting the figure.  In the production the dancer was wearing a painted body suit, so I painted the body accordingly with fabric paint. 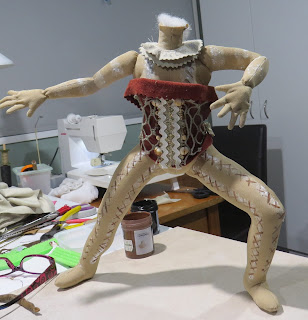 Luckily, I happened to have some velour in this russet colour!  I added some bits to embellish it to make the Bodice, and hand stitched it in place. 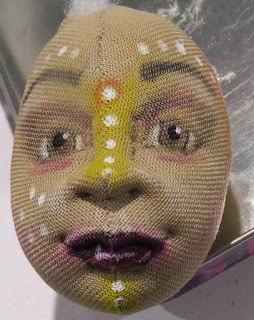 I was not delighted with this face, but plowed on, because it was number one!  I had a lot to learn about putting colour on a coloured fabric! 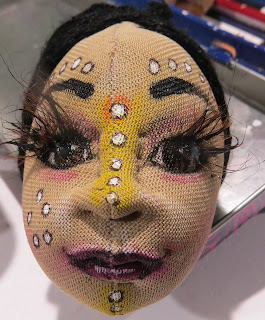 I was not happy with the eyes - too dark, so i decided to needlefelt some alpaca strands and make  outrageous eyelashes! 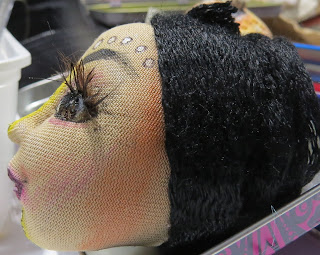 I didn't want to put on ears and used a cotton fabric for hair.  In retrospect, I would put ears on which would balance the head better - even though it had the mask! Or at least, put more 'hair' around the ear area. (Something I learned!) 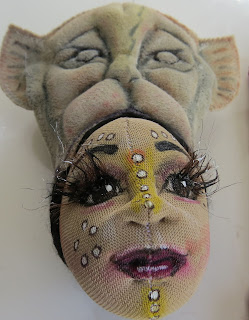 I  made several masks before I made a pattern for this one, which is trapunto. 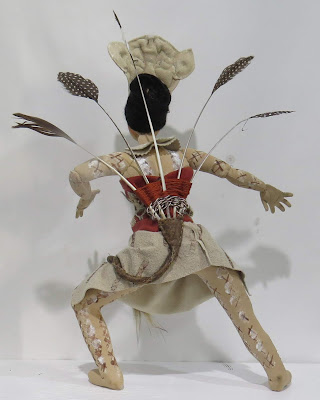 The corset is meant to look like a ribcage, but after truing with wood, I was not satisfied, and so used these feathers to weave into a fan shape,  Still not satisfactory, but took artistic licence with it and let it be.  I added a leather tail to the base of it.
The skirt is made from a faux suede, which I stamped the pattern on.  It draped very well.
I was happy with the overall pose.


Posted by SFM Cloth dolls With Attitude! at 5:53 AM 0 comments Links to this post

I am a Figurative Cloth Artist, Pattern Designer and Tutor, holding weekly classes in the warmer months, and workshops elsewhere in NZ a few times a year.  I am also an active member of in a Gallery. 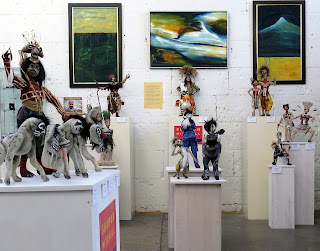 Reflections on the Lion King.
I have had a desire for some time to do something more ‘art worthy’ than anything I had previously done.  To extend myself beyond what I consciously knew.  My mentor had been encouraging me for ages to have an Exhibition, and I was always hesitant because I didn’t feel ready.  But working and focussing on this Exhibition took me to that “different place.”

I am kinaesthetic, and my inspiration comes from movement – what I see and hear. I enjoy the process, but to help me think, I need to stop and maybe sweep the floor, or play with the dog, in between bouts of creative action.

My impressionable childhood was in the 50’s, after the war.  The era of musicals, song and dance.  My adult family members on my mothers side were all performers of song, poetry, acting, and different forms of creativity.  My mother was into politics and had a hunger for learning, but my grandmother was thankfully, very creative, and my love for making things came from her.  It was mum who taught me to sew – not consciously, because she didn’t have that much patience, but I used my super-powers of observation while she thought I was doing the ironing, and taught myself when she was out at Labour party meetings!

I was first inspired by hearing the music from the Lion King, and then ‘hooked’ the first time I saw the opening number on Utube, with Rafiki calling – like a Karanga - and singing about the circle of life, which like so many, I connected with.

The words, the posturing, passion, dance, costuming, and dramatic effects that told the story!  It caught my imagination and I was curious to see if I could make any of it.  The decision to go with the Lion King, became a turning point in my knowledge and understanding of this art form.

I started making these figures in March 2018, thinking I only had five months to complete them because it was going to be open for Spring. Then that became December, and then it became unknow  ,as work progressed at the Forrester. I was pleased I managed to get 15 pieces made before Spring, and it was so time consuming, which I chaffed at!

I learned that preparing for an exhibition is an onerous task!  Times, when I was inundated with other work, and big things happening – like they do, made me feel I was wasting my time!  Doubts about what I was doing.  Why on earth was I doing it?  For what? Is it worth it? It felt like such a waste of time, with everything demanding my attention.  I said so to my Mentor, who is always positively constructive.  She said, “Because you love it!” You don’t need a reason!

Okay, that’s the other side of it! I began to change my attitude, because I realised I had been looking for a creative challenge, one that enabled me to dig deeper into myself and see what was there.

There is nothing like doing a series of something, to develop skills and techniques that I would otherwise not have learned if I had not followed my own process of curiosity, to discovery.  I like this quote from Dorothy Parker, - “The cure for boredom is curiosity – there is no cure for curiosity!”

Now I am more aware of what is possible, that I am capable of more than I ever thought.  I learned that the more you do of something, the more instinctive you become with it, information I can pass on in my other work.

There are always sacrifices made when you set time aside to commit to something, and for me it was a year of not communicating as much with my family, or connecting on social media the same as I had previously with an online group I help co-ordinate, or on my FB Page, and Blog! I even lost income from lack of marketing and putting out new patterns, or even workshops last year – and I missed doing all that!

Instead, I had to focus, research, design, source, and manufacture materials to make these figures work.  I was grateful to have our OCDC Group, to sustain and support me, and who gave me plenty of other creative work to do to fill in the gap – and I am so grateful to them for their willingness to test things out for me! It has all been worth it in the end.

The Lion King Disney musical, which these figures are based on, has been going for 22 years, after it opened in 1997 on Broadway, New York. It still plays today and is the most successful theatrical production of all time. In 2019, an adaptation of the musical drama of the Lion King has come out in film.

For those unfamiliar with the Story:  The Lion King tells the story of Simba, a young lion who is to succeed his father, Mufasa, as King of the Pride Lands.

After Simba's uncle Scar, (his father’s jealous younger brother), murders Mufasa, Simba is manipulated into thinking he was responsible, and he flees into exile, where he lives with two fellow outcasts, Timone, a meerkat and Pumbaa, a warthog. They all live a carefree life under the motto, “Kahuna matata - No worries!

When he matures, Simba receives some valuable perspective from his childhood friend, Nala, and he is urged by his advisor Rafiki to “Remember who you are!”  He returns to challenge Scar, to end his tyranny, and to take his place in the Circle of Life as the rightful King.

My daughter Kylee, shared this quote by Kurt Vonnegut that says it all for me;

“Practice any art- music, singing, dancing, acting, drawing, painting,
sculpting, poetry, fiction, essays, reportage,
no matter how well, or badly, not for money and fame, but to experience becoming, to find out what's inside you, to make your soul grow."

Posted by SFM Cloth dolls With Attitude! at 4:58 AM 1 comments Links to this post 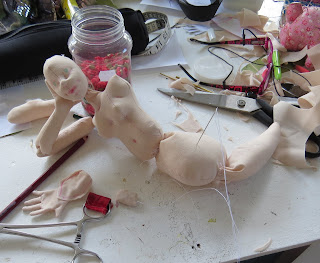 A piece by piece project, I have wanted to make a Mermaid Marionette for some time. 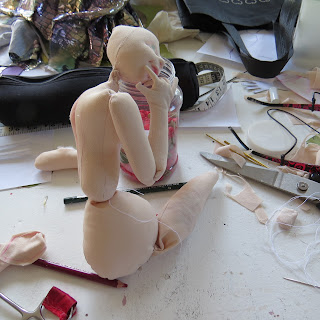 I wanted to make it in segments that would facillitate a more natural movement. 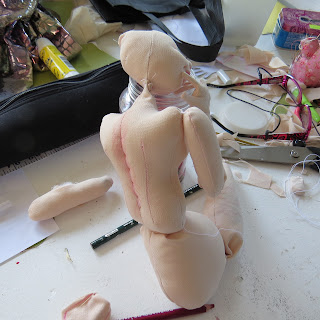 Luckily, all the pieces I designed fit together nicely, though I did have to modify some pieces.  When I was designing this figure, I had seen something on Pinterest and was struck by the exagerated length of the fingers, which lent an eloquence to the figure that I liked, so I am trying to put it in this prototype.  I didn't quite get there, but I will keep trying 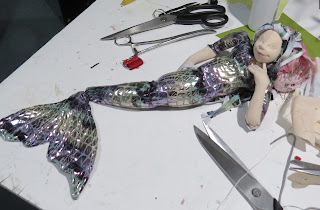 Then slipped on the casing over the body, and added the tail. 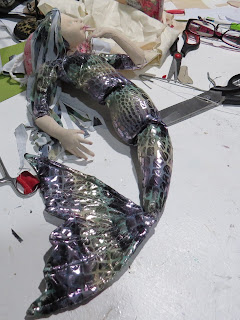 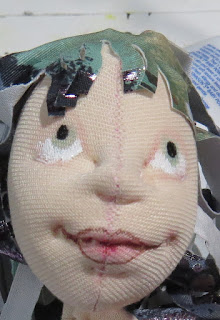 Next - the face.  I drew in the eye shape, and wanted to give this faceto be looking up, so that if her head was down, she would still be looking up. I  marked in the Iris colour first, with green Prismacolour pencil, then put the white halfway around it, leaving white under the iris.  Next, I put in the pupil at the top of the eye shapein the centre of the iris.  I used the head pattern I have in my Needlesculpting, drawing and colouring expressive faces Tutorial, on my Etsy page, https://www.etsy.com/nz/shop/SFMClothDollPatterns?ref=seller-platform-mcnav 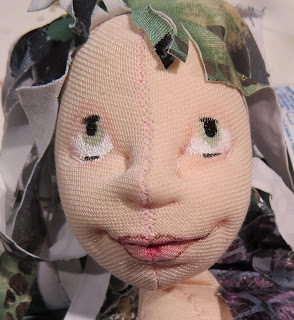 On this head, I did use a different technique for sculpting the lips, but everything else is standard.  Here I have now placed black marks on top of the pupil, and the base of the lower lid.  this is how I work out if the eyes are the right size and if the pupil is centered correctly. 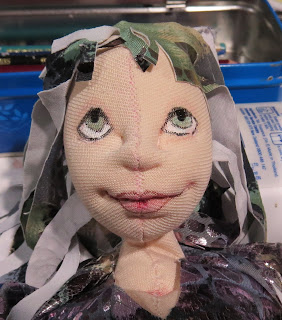 I finished drawing in the eye shape to the corners of each eye with black gel pen, then overpainted the top eyelid and feathered the edges, to look like lashes.  I used silver gel pen on each side of the eye to create the eyelid crease, and went over it while it was wet with the same green as the eyes, to creat depth and contour.  Also a little lightly under the eyes.  Drew in the eyebrows, and highlighted the eyes with white fabric paint. 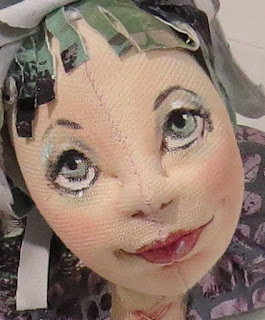 I outlined the lips with Micron pen in brown, and coloured the lips with Crimson Lake red prismacolour pencil.  Drew in her nostrils - keeping the nose subtle, because the eyes and mouth are the important features.  A little white highlight on one side of the lower lip.  Her cheeks have Faber Castel flesh chalk pastel rubbed on, and the brushed off with a blending brush, to give that softly blushed cheek. 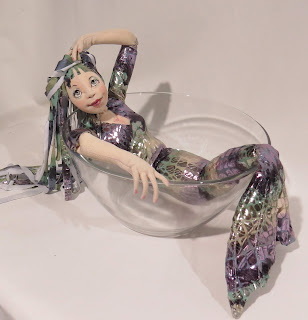 So here's the Drama Queen 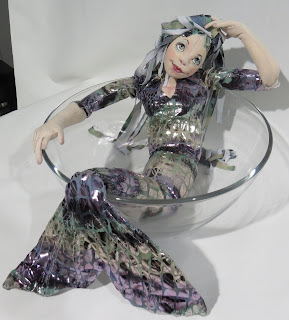 Showing off all her moves 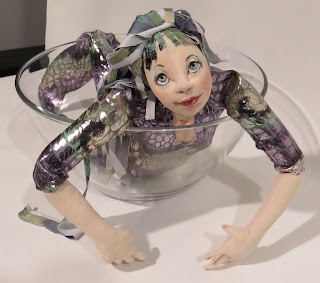 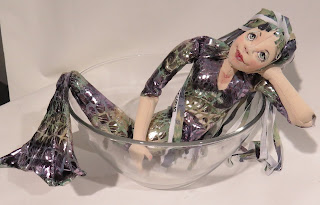 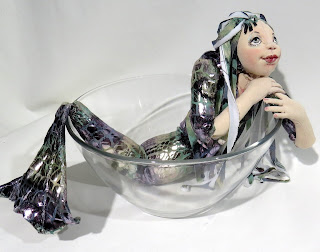 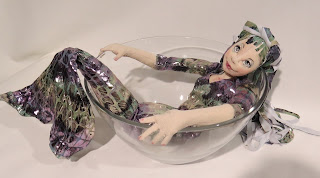 To be strung up!
Posted by SFM Cloth dolls With Attitude! at 7:16 PM 2 comments Links to this post