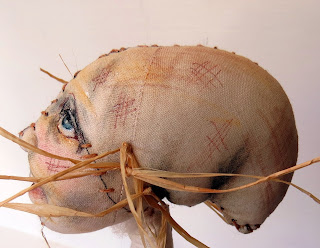 My inspiration for the Strawman came from Pinterest - of course!  I saw an ornament someone had made in clay and loved the idea.  I began this project not knowing how it would work out, but I was excited by the idea of a bag head!  I used a good quality homespun neutral fabric. 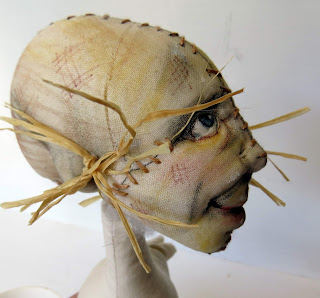 After needlesculpting and colouring his features in, I stitched down the seams with embroidery thread.  I used a natural colour rafia to represent the straw. 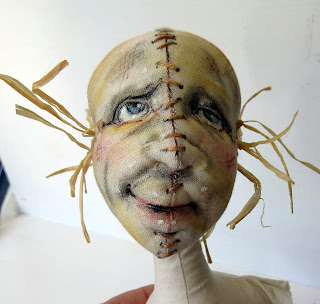 I am very pleased with how his head turned out!

Putting together the body, I wanted to keep it fairly simple.

to enable him to stand so well, I inserted two glued together card soles into his foot, which also has a sole.  this worked well with the wire armature, which also inserted into his body for stability.  I chaped the legs to create buttocks, but they could have been fuller.  I wasn't worried about that  though, because after all - he's a scarecrow!

I was pleased with the two part arm that helped with the pose - thanks to Antoinette Cely design!

Next came the pants - a suedecloth that was soft enough to ruche and just the right colour!  The boots worked so well too!  Good old black calico!  Cut to slip on his feet and wrap with more calico strips!

Next came the jacket.  Easy enough, but took a while adding all the patches and buttons.  Next I had to stitch straw into the clothing.  Making the Scythe was a mission initially as I had to think through what would work.  I tried wire, but it was too heavy and pulled him over.  Wood would not work, in case it sold to someone leaving the country!  It had to be cloth, wrapped in masking tape, and then batting, and inserted into the tube. Painted with Gesso and then Fabric paint. 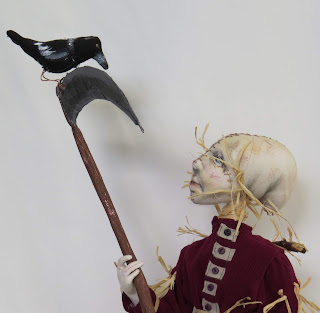 The blade is made from card, lined with fine wire and wrapped with masking tape.  Painted with Gesso and  black fabric paint, edged with silver paint.  the wire attaches it to the handle.
I had earlier made this magpie for something else, but it was just right for this purpose as I was in a hurry to get it done

The finishing touches - add patches to the clothing, paint dirt on the clothing, stitch the head on and stitch the handle to the hand.
Strawman was created to scare crows away, which worked on the first day.  then an old crow realised he was just made from straw, and allthe crows came and ate the corn!  The old Crow returned and informed the Strawman he had no brains! thus began the Strawmans quest to develop his intellect, and on his journey to Oz was actually the smarted one in the whole group!

Posted by SFM Cloth dolls With Attitude! at 2:27 AM 1 comments Links to this post