I have now made five characters from The Lion King, and I am at the stage of just about knowing what I am doing!  I feel like writing about my process now, to enhance my learning.  Of course, the more you do something, the more you automatically know what to do!  Sometimes if that is not captured, it can be forgotten, so I am writing.I actually started with the mask for this one, as I was curious to see how I would do it and what it would look like!  I was always planning ahead, and thinking about the next bit.  I knew the body would not be difficult, as I had the pattern modified sufficiently by then, so I didn;t think too much about that, except that I would do the feet differently!I left the head till last - not because I thought it would be hard, but because I had to source all the elements I needed to make the costume!  Eventually, after much searching and not finding the colours/patterns I wanted, a South African friend gave me some of her fabrics to try, and I found one that woudl work for the loin cloth.  Then I searched my own stash - and found enough of a scrap of lycra, from someone's dress that had just the right pattern on it - and it was black and white!  Yay!  It worked - and I painted it yellow so the black pattern showed through! 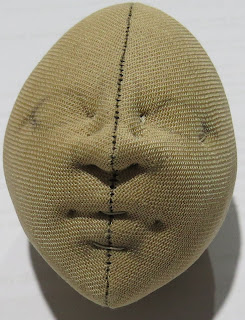 When I looked at the original Mufusa face I wanted to copy, I chose one with strong features. I designed the head accordingly, sewed it up , stuffed it and drew on the features I wanted.  I decided on simple needlesculpting techniques, as this face was mostly painted. I was not worried about the black stitiching line down the centre, as I knew it would be covered.  I needlesculpted the face and was quite happy with the result! 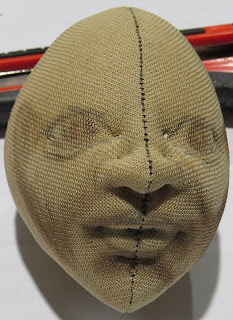 Next, I drew the shadows on the face in a dark brown prismacolour pencil.  I later went over this with black prismacolour pencil, to deepen the shadows.  I also used the brown to put in the pupils of the eye.  I fill the whole eye shape with the circle of colour.  The eyes are outlined in soft lead pencil. 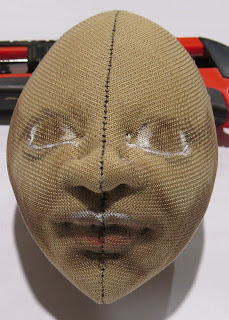 I paint in the whites of the eye, mostly to outline the iris and not going in too correctly into the corners, letting the fabric tones give shape to the eyeball.  I used a fine paintbrush to underline the eye with white, and outline the top of the lip, which I rubbed lightly with Prismacolour crimson red. 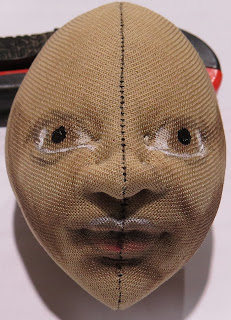 I used the blunt end of a bamboo skewer to dot the black pupils on the eyes.Right in the middle and hopefully evenly! 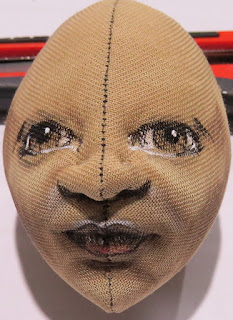 Now, I use black gel pen to outline the eye, the eyeballs and carefully into the corners of the eye to create the curve of the eyeball.  I placve the white highlight in the same position on each eye. I also outlined the lips with the black pen for a theatrical look.  After all, I want these features to be seen at a distance!  I lightly highlighted the bottom lip with strokes. 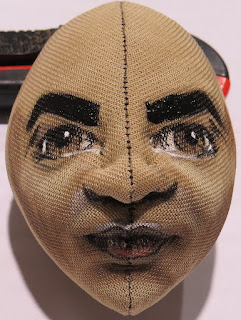 Using the midline as a reference, I drew out the brow shapes, and painted them in with black fabric paint.  I used a little cream prismacolour pencuil on the upper cheeks. 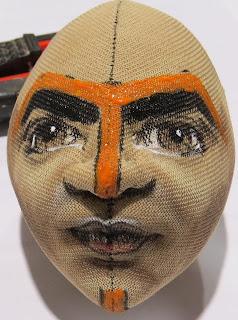 I evened up the brows and drew the line down each side of the nose and chin, trying to keep it even.  I mixed red and yellow fabric paint to make the orange I was after, and marked out on the forehead the thickness, before painting it on. 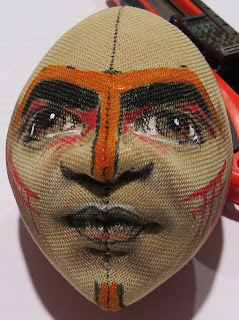 I usesd red fabric paint to paint in the cheek markings, the inner eye and a little orange on the outer upper eye under the brow. 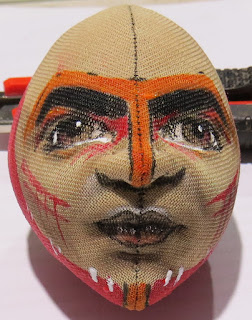 The sides of the face and chin are painted in red fabric paint and the other markings laid in.  I paint the orange and black brow markings, the eyeballs and the lips with Mod Podge, to give them a shine. 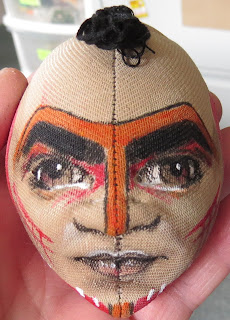 I begin to try making hair, using embroidery silks.  I stitched it front to back, preferring not to use glue on dolls if I don't have to. 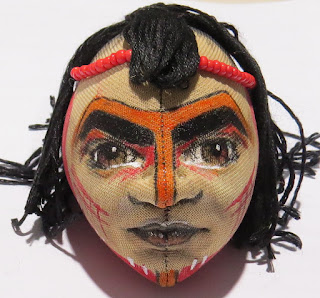 To finish the head, I thread some seed beads in red, to compliment the other colours on the face.  In this case, I had to use a spot of glue to keep the hair down and cover the beads, for the look I was after.   I could have made the hair longer, but not enough embroidery thread!

Posted by SFM Cloth dolls With Attitude! at 4:35 AM

Wow, Sharon, this character is really looking great! So intense. Can't wait to see it finished. Are you going to do something with all the characters??