Not everyone is on Facebook, and some of my dollmakers saw this first piece that I made and were a bit  - ahem - bemused, by it, and so I thought you might like to see how it all ended up!

While I had mixed feelings about reactions to it, I felt I couldn't waste it because I knew it would have some appeal to some people, so I ploughed ahead- a little bit defiantly!  Ha!

I was taken by the illustration and the story about the life of matches, from a Hans Christen Anderson story, told by the ugly duckling, who grew up and turned into a swan! 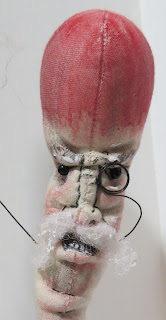 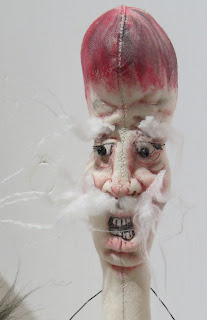 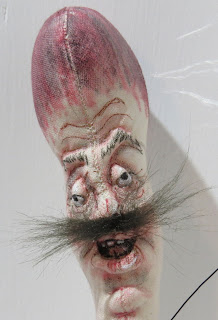 The first one looked a bit - funny - so to speak, but with them assembled all together it becomes a novelty ornament that will amuse someone! 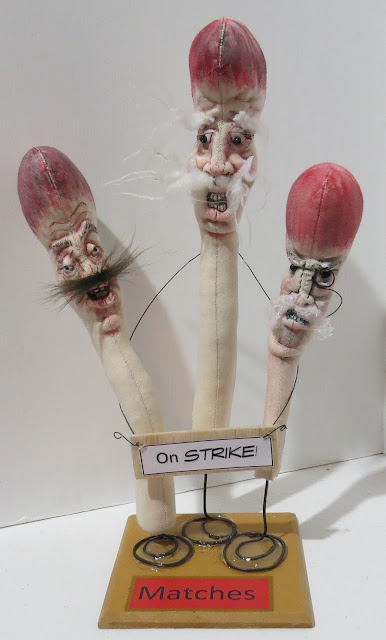 My enjoyment from making this came from problem solving, and the process - how to do it, what to do to it to make it 3D and how to set it up and make it look amusing. I love a play on words!  ‪

Meet‬ the Major Matchsticks!
They're standing for their right!
They reckon they are too old to burn,
and so have gone on strike!

Majority rules and all that,
Harrumph!

Ha! Sometimes you have to do something novel, just for fun. I learned a few more things in the process.

Hope you enjoy them!

Posted by SFM Cloth dolls With Attitude! at 5:40 AM

Omgosh this is a great piece. Love the play on words...absolutely love the detail in the faces. Incredible!!

I saw the post photo and had to see what this was. I have to admit I got a kick out of the Matchsticks 3D characters you created. Good problem solving techniques.

Thank you so much! I had fun getting it out of my system!

Sharon put this picture in the new group. I love this. Humor at its best!!!