I was given a brief - to design and make St Dominic's family to celebrate 800 years if the Dominican Order of Preachers & Teachers.

The only picture of the family I was given was a Mosaic!  Various other pictures of St Dominic are also other artists versions of how he looked, but there has been  a reconstruction of his face - reference here. https://thepracticingcatholic.wordpress.com/2008/08/09/portrait-of-st-dominic/

So I began to make some heads and was delighted to accidentally design a new head shape! 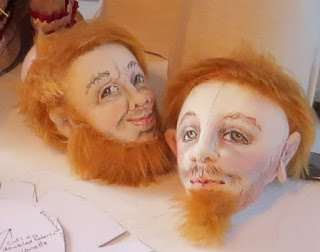 I used the same head shape for all the figures 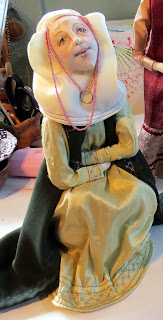 This is Dominic's mother Joanna of Aza.
Her husband Felix DeGuzman was a knight and they were an influential Spanish family in the 13th Century. "According to tradition, Jane had a dream before her son’s conception in which she saw a hound racing through the world igniting everything with a flaming torch. Troubled by this dream, she went to pray at the Benedictine abbey of San Domingo de Silos, located in a pleasant valley about twenty miles north of Caleruega. This dream was indeed prophetic. Dominic did ignite the world with sacred truth through preaching and teaching born from a life of dedicated prayer, love for the Word of God, and a burning desire to gain souls for Christ. It is widely believed that Dominic’s keen sensitivity to the sufferings of others, which he displayed from childhood on, was acquired from his mother, who, although from a noble family, was known for her compassion toward the poor and needy. From her Dominic also acquired the habit of prayer." 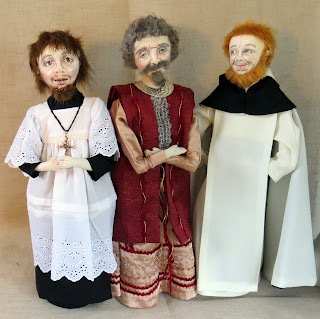 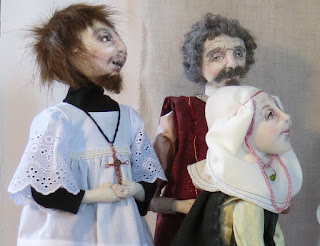 I have tried to portray them as close to an ordinary family as possible. 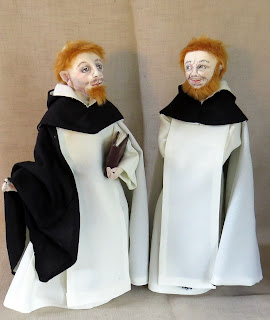 As usual, the robes took longer to make than the figures, which are stump dolls. 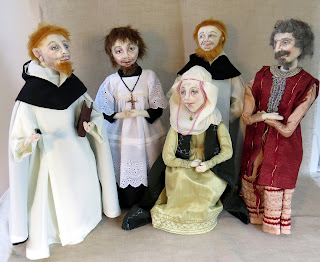 I have kept the bodies to a very simple style, as the focus is mostly on their individuality as a group of people. 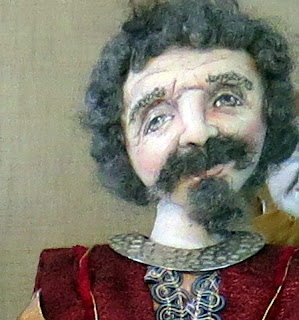 Felix has raw wool needlefelted hair and drawn features.  he has a beaten Earring collar!

Posted by SFM Cloth dolls With Attitude! at 5:03 AM

Labels: Dolls I have designed 2015

Such wonderful male faces. Will you do a pattern? I keep wanting to do the 3 wisemen and can not find a male face what I like and have not done any male dolls. Great charachers!

Happy to design some heads for you Ruth Ann!

Absolutely love these dolls and especially those fabulous sculpted and colored faces!!!

Email me Ruthanne. sfmitchell@xtra.co.nz I tried your email and it bounced back!