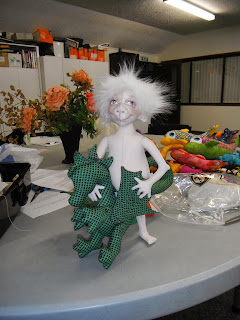 Jo's been preparing for the Strawberry Fare!  Got the dragon's nearly made and someone to look after them! 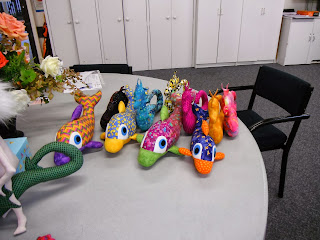 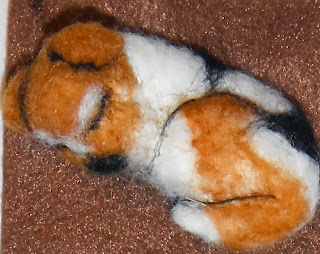 And I've been playing with wool - made a couple of brooches for fun! 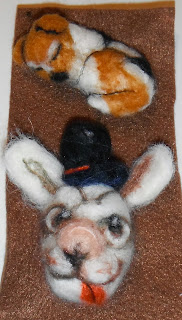 I've got a lot to learn here!  LOL!  Keeps me quiet!
Posted by SFM Cloth dolls With Attitude! at 1:01 AM 0 comments Links to this post


This is a Doorstop doll I made for a friend.  The request was for something bright and inviting.  Hopefully this Lady is!  She's definitely not the maid!
She was made to meet and greet people who come into the home!

Under her clothing is a plastic milk container with a handle situated under the bustle for easy moving, so she doesn't need to be picked up by the head!


This might make a good pattern! What do you think?  I like opportunities to recycle and this is made almost completely from recycled materials!


Had fun making this one!

Posted by SFM Cloth dolls With Attitude! at 5:13 PM 0 comments Links to this post 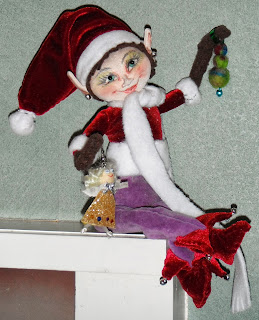 Here's a sweet little pixie doll I made today, when I found a head I'd made a few years ago and done nothing with.  Thought I'd stick with the Christmas theme and make her Santa's little helper. 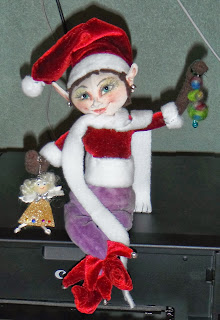 I had been experimenting with head shapes and used beads for the eyes.  It'll be alright for our local Fete on Sunday and also kept me out of the way while my old fella put a new bathroom in!

Posted by SFM Cloth dolls With Attitude! at 3:07 AM 2 comments Links to this post 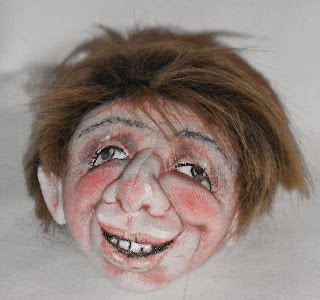 Someone from Greece asked me to make a doll for her representing a man who has been drinking.  She called him a Drunker man.  She had bought my Innkeeper pattern to make the doll, but was worried about making the face as she wanted to give it as a gift.  She asked me to make the face for her for a portion of the price it would have cost her for me to make the whole thing, so I agreed, and this is what I came up with, according to her specs.
I took this photo and sent it off for her approval.  Happily, she liked what I had done, but she didn't like the blackness inside the mouth and said it made him look sick instead of funny, and could I change it. Even while I coloured it black, I could see it was not right, but sent the pic off anyway expecting her to say she didn't like that head and would I do another. I just wanted to know, so I could get on with it! 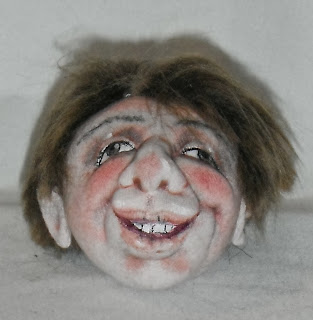 When she explained what she wanted I thought I'd have a go at changing it with paint.  So I painted all but the fine edges of the inner mouth with white acrylic, let it dry.  I used watercolour paint in a dark red mixed with a little paynes grey to achieve this more healthy colour in his mouth.  I used the black Gel pen again to draw in the teeth, then painted the inner mouth - not the lips - to give it a finish. 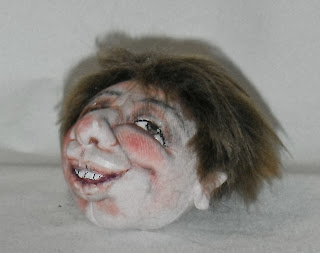 The thing is - like everyone, I am still learning too!  It's one thing to be able to  needlesculpt adequately, but getting the colour right is very important to the overall look of the doll.  I am grateful for the feedback I received and to be able to correct it satisfactorily, as well as to learn from my mistake!

Posted by SFM Cloth dolls With Attitude! at 10:58 PM 3 comments Links to this post

I have been making some pig pincushions, from my pattern, Pin Happy Pig for the end of year Fete we have here.  I enjoyed putting them together, using different fabrics and embellishments!  Some fabrics cause the pig to be larger and some are smaller, as you can see in the top picture.  Placing the ears wherever you like, for a different look and on one, using crushed velvet gave a different look too!  With that, I had to lay the top fabric on the velet and stitch first, before cutting out, due to the nap moving around! 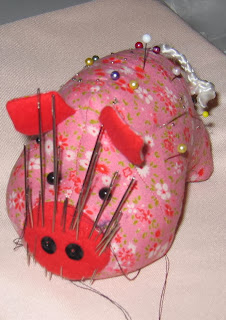 This is the original Pin Happy Pig I used for my pattern, which you can buy on Etsy.

Posted by SFM Cloth dolls With Attitude! at 10:30 PM 1 comments Links to this post