MY VERSION OF A SANTOS DOLL Julian Of Norwich – ‘All will be well and all manner of thing will be well!’

I want to talk about my process for making a doll, what starts it off, what is involved, the conclusions I come to and recycling!Processes fascinate me.  As a reflective person who does things, then thinks about how it happened later, I am analyzing my processes in writing, in the hope that others will explore their processes and understand themselves and what drives their creativity better! 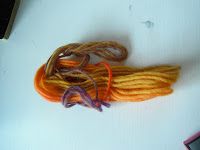 This doll came about because of one small thing.  Someone very generously gave me the variegated, brightly coloured, spun wool  I used  for the hair – a small amount that had not yet been twisted into yarn but not enough of it to do much with.  I was drawn to it and looked around my studio to see if it would make hair for a doll.
I had some body parts lying around that I had been experimenting doing needle-sculpting on that I had trialed for other dolls and had been discarded, so I grabbed a head and found the wool looked great on it. 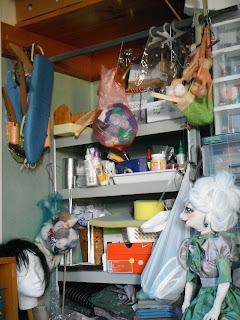 I noticed my thought processes speed-ed up and I became focused on problem solving.  I wanted things to happen quickly to see if anything would work, so I looked around and found a needlesculpted body that fit the head and thought – I can’t be bothered making legs for it but I want to see what it looks like with some height, so I found the cardboard center from a paper towel roll (that you always stash for future possibilities - right?) and sat it on that. 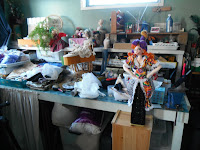 Just the right height – but what can I stand it on to fix it in place?  How can I fix the roll on to the doll?  By now, I was excited by a possibility and rummaging around the mess on my workbench I found - some old square glass coasters - that I thought might come in handy one day!  I turned the glue gun on and glued the base of the roll to the coaster and tested it for stick-ability.  Yup!
Then I found some black calico that I always have on hand - so handy!  I tor off enough for the length of the frame and just enough to go around the square base with a seam allowance.  I tacked the calico to the bottom of the base with the glue gun, then pulled it up to the waist and handstitched it to the body tightly, pulling the fabric up taut to gather around the hips of the doll.  This held the body in place and gave the whole thing stability!  Yes!
That's when I got the idea that it looked like a Santos Doll - or cage doll and ideas began to form about what I knew about these dolls.  I made the connection with Julian Of Norwich, who is famed for her quotes.  (I like quotes) One that has helped me so much in my past was:

"ALL WILL BE WELL AND ALL MANNER OF THING WILL BE WELL!"
At this time I had just been made redundant, which is a bit disconcerting at 63. Five of my colleagues had also been thus affected and there was a lot of anxiety around change happening for people I was close to - and indeed around the world.  I wanted to make something that would spit in the eye of anxiety and bring an attitude of positivity to any change!
The next stage was connecting the colours of the hair to what I would dress it in.  I found some gorgeous multi-colour fabric I'd had in my stash for a few years and could never find a use for - the exact colours in the wool!  (See - a time and place for everything!)
I have bucket-loads of lace people keep giving me because they know I make dolls - I hardly ever use lace - so thought this is a good opportunity to get rid of some, but didn't know if the lace would go with the fabric, but I plowed ahead - if it did it did!  If not - start again!
I wanted a style that would show off the dolls curves without exposing much,(after all this doll is meant to be a bit saintly) so it had to be V necked, front and back with darts for shape and an added Peplum for style that would cover the skirt.  Next came puffed sleeves and the lace! The top was stitched in place and the black bow to finish off.

That's when I thought - I need arms!  I didn't want to have to go to the trouble of doing fingers, so I drew a bent arm shape on paper, beside the body to see if it would fit.  I was pleased with the shape of it, so traced it out on the fabric, stitched, cut out and stuffed them and then stitched them in place.  They are fixed in place, but I could have joined them with a button to make them move if I had wanted to.  As it is, this doll can also have her hands on her hips, and it doesn't matter that she has no  fingers because they won't be seen!  Being able to change the pose adds to the attitude of the doll.  I like that! 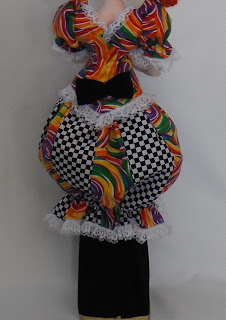 I didn't have enough of the brightly coloured fabric to make the skirt and wanted to tie the colours together so I used a scrap of check fabric - just enough to make panels.  Laced, gathered at waist and ruffled with elastic at the bottom and there you have a 'Little Bo-Peep' skirt!

I was pleased with the effect, but it left the front a bit stark, so I dug out my beads,thinking it only needed a little bit doing to it - I'm not really into beading much.  I decided I wanted to write the words, but wanted it to be subtle, so that it had meaning for the person it belonged to, so stitched the words in, then dotted it around with the red beads, just enough to make it interesting but not overloaded! 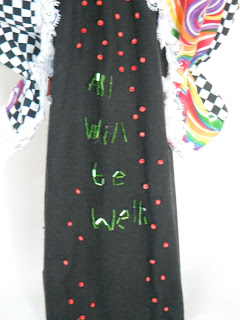 It's very hard to see in the photographs, but it's a good message!

After all that, I turned to the hair piece.  At the end of the day, the santos doll is derived from Medieval times and I did want that reflected here - slightly! So using copper wire, I divided the hair up, making curls at the front, twists out the sides and one big twist raised above her head,  a bit like a wimple! 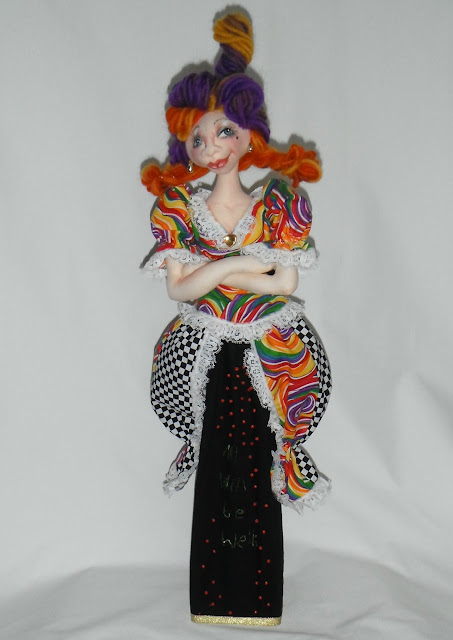 I wanted this doll to be a bit zany, not religious, but to give a life-giving message about staying positive in the midst of change and having the attitude to back up the message! 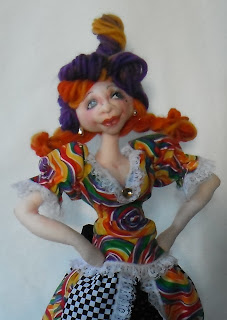 So there you go!  My version of a Santos doll I call Julian of Norwich!
As with a lot of dolls I make, I do some research.I found this article at  http://www.trilbyworks.com/category/blog/the-pain-the-process/.
Santos Cage Dolls are part of the Spanish tradition of Santo (Saint) art, carvings in ivory or wood of various and plentiful Catholic saints, angels, or the Virgin Mary.
Rural villages without churches used the statues as replacement altars and in Catholic religious processions. Smaller statues were most likely made for private devotion.
These icons were crucial to the Catholic church’s quest to Christianize not only the peoples of Europe, but especially the indigenous peoples of the newly colonized Americas.
The Santos artist is called a santero. He worked in the European tradition of polychrome (painted wooden) sculpture using locally available wood. In the Americas, that would be pine, cedar, mahogany and other soft woods. Crowns could be made from gold-plated aluminum tin, hammered brass, or gold, the last generally reserved for wealthy clients such as churches.
Art historians typically divide the Santo art into two types: the mannequin Bastidor style and the fully carved detallado style.
Some statues are dressed in ornate religious garb, often topped with golden crowns. Angels often have carved wings. The cage style statues wear expressions that are beatific and serene. The cage could also be used as a sort of prayer shrine with objects placed inside the cage.
Here are further links to look at if you are interested.
http://www.santoscagedoll.com/
http://www.si.edu/mci/downloads/reports/Closer_Look_at_Santos.pdf
http://www.capipota.es/12623.html
Posted by SFM Cloth dolls With Attitude! at 10:33 PM

This is a really gorgeous doll.Love her spunky costume as well!! Well done.

Fabulous Sharon!!! I love all your dolls!
hugs Karen

She is gorgeous Sharon.

Glad you like her - thanks for your comments! She now has lacy gloves and is residing at the place where I sell my dolls here, waiting for an end of year fashion parade where she will act as the "filler of awkward spaces!" There is a nice tall woman there who will manipulate her strings! LOL! She'll love it! Teh Fashion Parade will have a Paris theme, so for this event we'll call her 'Madamoiselle from Armetiers'! Like the song, so people can relate to it! LOL! Should be fun!