Just to prove I am actually working on things here in the depths of my studio, I have an Innkeeper 'up and coming' and a Steam Punk man that looks a little like Mad Max at present!  They're coming along nicely but they do make an awful mess while they're being created!  The weak looking bent arm will have a mechanical contrivance on it in the end - a prosthesis!  At this stage they're al least standing alone!  I'm quite pleased with them so far.  Mad Max now has hair on and he looks "DANGEROUS" ladies!  I modeled him on someone called Nathan Drake.  Of course when he is made he'll have a 'Steam Punk' name.  I'm making him for the Steam Punk Exhibition towards the end of the year.  My Grandson Ben gave me the idea as he's doing a digital equivilent for his digital art course.  I've got strict directions on his clothing!  In this picture I've just sculpted his face, but I have actually finished his face and hair now and just made his pants.  You will be surprised to see him finished!  He may yet become a pattern if anyone is interested! 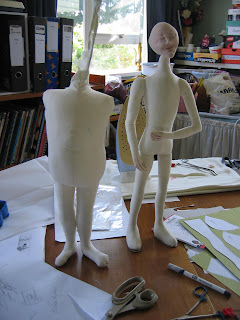 Posted by SFM Cloth dolls With Attitude! at 1:14 AM