"Make the best of the least - and the most of the worst"!

Posted by SFM Cloth dolls With Attitude! at 6:06 PM 0 comments Links to this post 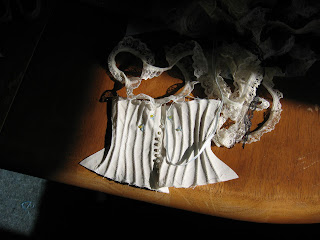 Thought I'd change Jill Maas pattern a bit and do some embellishing - seeing I hardly ever do!  Sometimes you just need to play and see what happens!
Posted by SFM Cloth dolls With Attitude! at 11:08 PM 0 comments Links to this post 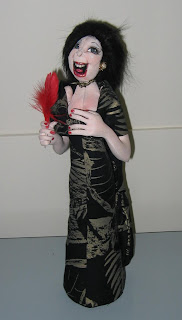 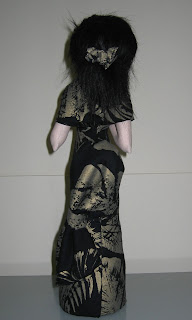 My version of Jill Maas pattern High Octave Hester.  I modelled her on my favourite opera singer "Monserrat Caballe", who sang with Freddie Murcury - Barcelona!  Just love her voice, and she presents as such a cheerful character who  loves what she does so well.  Spent the time making her while listening to Monserrat singing on utube!  Very inspiring to make dolls to music!
﻿
Posted by SFM Cloth dolls With Attitude! at 12:08 AM 0 comments Links to this post

A pattern is someone’s expressed idea and although it is able to be replicated, it does not need to be an end in itself, but is able to be expressed and expanded on by someone else.
To expect to replicate a pattern exactly is not always realistic and certainly does not mean failure.  It simply means something new and different will have been made with the stamp of someone else.
I often make something I am not satisfied with and put it away.  Later on I might have another idea I can use it for - the basis of a doll that is different.
A perfect example is the Steam Punk Doll I made for the Steam Punk Exhibition.  It started life as a body form for a pincushion.  For a few years it was headless.  Then I found a head I had disgarded beacuse I wanted to try some fur fabric on it to see how it would look.  I attached it to the pincushion.  I liked it and it continued as a pincushion for another year - very handy too!  I tried it with different hats and it became a manniquin for dresses and hats.
Then Steam Punk came along.  I had already made the Top Hat, so embellished it with Victoriana.  I pinned all sorts of elements to the body to play with the ideas associated with Steam Punk, i.e. nothing plastic.
Then decided it need more tradition attached to it, so found a piece of varnished wood from an old staircase to use as a base, wrapped leather and velvet around it to attach it to the body.  I photocopied an ornate keyhole, resized it, cut it out and glued it over black velvet.  I painted it with several coats of Mod Podge which stiffened it and gave the appearance of real metal.
I used an actual cotton padded shoulderpad cut in half, lined with wire and fur for the shoulder piece and stuck pins up-right in it.  Added arms with shirt sleeeves attached and it was done.
It was not particularly pretty, but it caught attention and the original unsatisfactory body and head was well disguised  by the overall effectiveness of the look. The naming of it and the story that went with it added to it's attraction.
Never give up!  It's all worth it in the end - and if it's not worth it, it's not the end!
Posted by SFM Cloth dolls With Attitude! at 4:51 PM 0 comments Links to this post

Ah it's good to be back with my friends at Oamaru Cloth Doll Crafters! Got a good ring to it?  OCDC!   We were missing a few members, but this is what everyone bought for show and tell!  I'm delighted at the creativity and great work of these dollmakers! 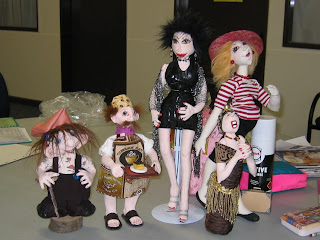 Aren't they wonderful!  They've been very busy.  Jean has made The Muffin Man for a local Coffee shop.  He comes with a surprise when he's turned around! 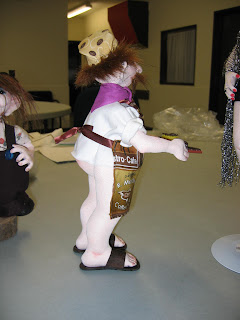 Jean would be soooo embarrased if I presented the whole back view, suffice to say - he has all his bits and pieces!  He should be a good talking point at the Coffee Shop!  He is actually very well made and Jean always makes a very good job of what she undertakes to do. 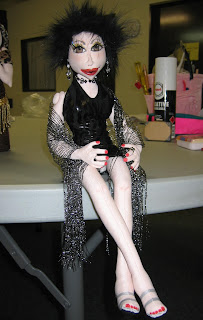 This delightful young thing(called Jezza-Belle I think) has just got great legs and her beautiful shoes are painted on - but you'd never know! 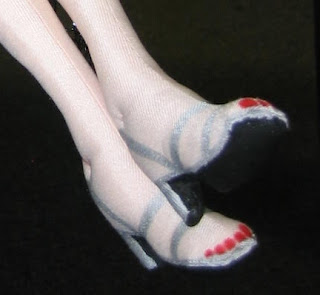 She's sporting lucious sparkling eyelashes to flash too, so it's murder on the dance floor!  Adrianne is really getting in the swing of dollmaking now and is refining the details.  It's so exciting!
Posted by SFM Cloth dolls With Attitude! at 11:39 PM 0 comments Links to this post 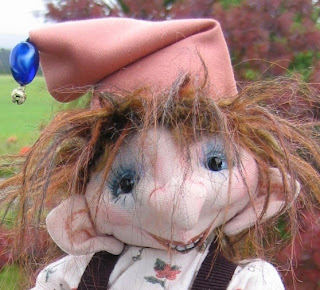 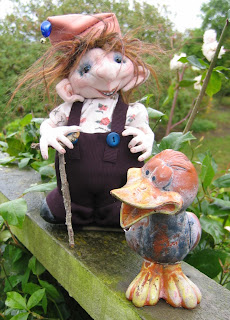 My first project for 2011 - A nosey Gnome who hasn't got a Gnome to go to!  It a laughing Gnome - belongs to the Gnome Association of course! From Gnome-man's land!  Ha!
Posted by SFM Cloth dolls With Attitude! at 3:26 PM 4 comments Links to this post